A travesty in three acts 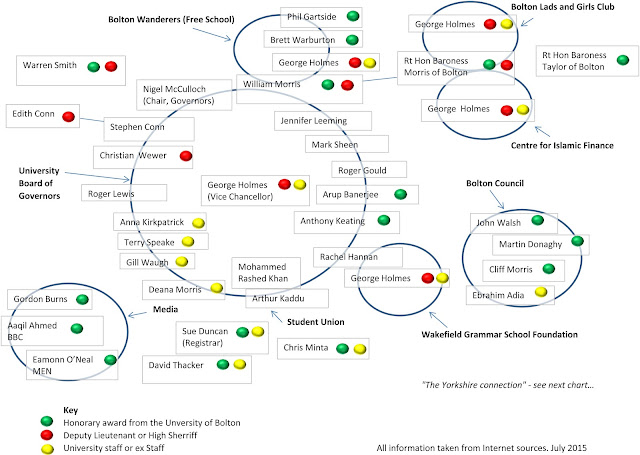 A cocktail party in a lavish private house. Guests are formally attired, the women in evening gowns, the men in dinner jackets or uniforms of distinction. A string quartet plays discretely in the background. George, dressed in a white dinner jacket and gold embroidered waistcoat with red cummerbund, is speaking with Bill. Bill has had a little more to drink than is good for him.


George:       (Taking Bill's arm  impatiently) Bill, Bill, what’s the matter with Wazza? I’ve
given him a bloody doctorate, but still nothing. Haven’t heard a thing from him.
Can’t you have a word?


George:        Patient? A week after I gave Keaters his I was sitting in a racing car with
half-naked women crawling all over it.


George:        Got free hospitality at the Wanderers from Garters. Even Warby gave me
year’s supply of free crumpets. Nothing from Wazza. Not a sausage.


Bill:                I thought that might be a problem. Look, you kind of.... (adopts an
overweaning demeanour, smiles obsequiously) then say something like, “What
a wonderful honour it must be to be able to represent Her Majesty the Queen in
this distant oupost of her realm.”


George:         (Adopts a grovelling demeanour) What a wonderful honour it must be to
represent her majesty in this distant outpost of her realm. (He’s oblivious to
the guests nearby looking at him with amusement. He drops the mannerism)
How was that?


George:         (Practising a few more grovelling gestures) Quite easy really. Anything else I
need to know?


Bill:                 Yes, needs to be a good size. For entertaining purposes. Anytime there’s
bigwigs in the area, all that caper. Trish is always very good at that you know.
And it has to be over this way. Wakefield’s no good George.


George:          Who’s going to lend me that sort of money in this climate. Even if I
could find someone dumb enough, can you imagine the interest rate? At this
rate I’ll never get my bloody knighthood.

Bill:                 Well, well, George, who’d have thought. I had no idea your ambition was so
elevated. If you're thinking along those lines I should speak to Trish. She’s
been there, done that, got the tiara. But remember, never mention the thing
you want. Protocol. (Taps the side of his nose, departs to talk to another
guest.)

George practises a few grovelling flourishes of his hand, arranges his face in a variety of fawning expressions. He is self-absorbed as the Mayor approaches.)


Mayor:           I’m grand. (He too adopts an overweaning demeanour) I just wanted to say
how how generous it is of the University to offer honorary doctorates to those
who have devoted themselves to the interests of the town. It must be a
tremendous honour to receive such an award from your home town university.


Mayor:           (Visibly losing confidence, turns his head in the direction of the Leader of the
Council and the Leader of the Opposition, both of whom urge him on with
encouraging gestures) I was just saying, (studiously adopts the overweaning
demeanour once more) not that I would ever dream I might be worthy of
such a thing you understand ..... (his voice trails off as the lights fade to black)

The same cocktail party. George is at the edge of a group of guests which includes the Baroness, the Bishop and sundry others. He is attempting unsuccessfully to attract her attention.


George:         Yes, about ... about ... (Remembers the instruction from Bill, adopts a
grovelling pose) How absolutely marvellous it must be to receive an honour
from Her Majesty.

The Bishop, on hearing this turns away from the group to join them.

(Bill joins the group, even more worse for wear than before.)

They chortle among themselves.

Bill:                  I was telling him before, grab it quick if you get the chance. Gives you a boot
up the old ladder, eh Trish. Every time there’s a local shindig you’re sure to
get in on the act. Acting on behalf of the Queen. Meet some very interesting
people. (Taps the side of his nose) Know what I mean?


Are you all right George? You seem agitated.

(There’s a moment of shared enlightenment, as Bill and George and Trish all have the same idea simultaneously. They look in turn from one to the other.)


Bishop:             I mean, the only institution with that sort of money going spare in Bolton is
the University for God’s sake!

Bishop:             It's absurd. As if the Board of Governors would agree a million pound loan to
its vice-principle! People would think they'd gone out of ther collective mind.

George:            An absurd idea, as you say. Absolutely absurd. Though, since you've
brought it up Bishop, .... (Puts his arm around the Bishop's shoulders, smiles
at him, and leads him way)

The same cocktail party, outside a toilet/bathroom. George is with Suze.


George:         Now Suze, all you've got to do is convince the Bishop it's in the interest of the
University.

George:        Then flatter him. Appeal to his noble instincts. Yes that's it.
What's good for Bolton's good for the country, that sort of thing. Invoke his
patriotic spirit.

George:        I don't know. Sing God Save the Queen. Recite something out of bloody Kipling.
You'll think of something.

The Bishop enters, ushered along by Gordon. George ushers everyone into the toilet. He seats the Bishop on the lavatory, himself on the bidet. The other two sit on the edge of the bath.

George:        Thing is Bishop, this loan is extremely important. It’s for the good of the
University. Means I’ll be able to devote even more time to the job and the town.


Suze:            Well, let’s look at the numbers. Eighteen governors, including you boss. Two are
Deputy Lords, one’s married to another. They’ll recognise the importance of
what you’re trying to do. Then there are the three doctorates, so there we’ll
just be calling in a favour. Four are employees, who presumably want to remain
employees. Two are student union reps who would very much like to keep their
funding. I make that twelve. Then there’s yourself and the Bishop, which makes
fourteen. Take one off for double counting Bill who’s deputy and doctorate so
that’s thirteen. I’m no mathematician but that seems like a majority to me.


Suze:             Don't allow your natural modesty to deflect you from your duty. Just remember
the entire future of the University, indeed the nation, will be in jeopardy if
George can't move to Bolton. You and you alone hold the key. (She leans
forward, stares intently at the Bishop). You alone have the power to guide
others onto the path of righteousness. I look at you and think of Henry at
Agincourt, Wellington, Churchill, Bob Geldoff. It’s the burden men of your
stature are fated to carry.


Suze:             Indeed it is. Few men these days are able to rise to the challenge of leading
others in the face of unenlightened opposition. It takes moral courage, mental
strength and a singular will that few men possess. (She rises and declaims in
the manner of an orator) If you can keep your head when all about you are
losing theirs and blaming it on you. If you can trust yourself when all men doubt
you (a momentary look of confusion, before continuing with ever more
elaborate gestures) on the road to Mandalay, where the flying fishes play. It
was an ancient mariner and he stoppeth one of three. April is the cruellest
month, I'll go now to Innisfree. I should have changed that stupid lock I should
have thrown away the key. Unravished bride of quietness, river deep, and
mountain high. (she finishes with a flourish and a Scots accent) Gie fools their
silks, and knaves their wine; a man's a man for a' that.

George:         Well that’s settled. I knew you’d see the reasonableness of it Bishop. So
Flash, how do we spin it?

Gordon:         Dr. Flash if you don’t mind. I don’t see a problem. It’s for the good of the
town and University, obviously. Nothing whatsoever to do with your social
climbing being underwritten with University funds.


Gordon:         Yes, take the lead, get a positive story out there. Dish out a few more
doctorates if you have to. Keep ‘em sweet.


Bishop:           (Over-excited, intoxicated by the moment) How wonderful. By the way Dr.
Flash, did you hear the  one about the furtive ram imported from South Africa
to improve breeding rates up on Holcombe Moor? Krypton Factor, then
Krypt...... (a knock at the door. They freeze. The door slowly opens to reveal
the Leader of the Council)


Leader of C:   It's Dr. Big Man actually. Nothing important then?


Leader of C:    (squeezing into the toilet) Rather fortuitous actually, George. We were
debating the future of the town in cabinet the other night. And I was thinking,
just an idle thought, thinking off the top of  my head, you know, from out of
nowhere really.  (Assumes a grovelling demeanour) Wouldn’t it be wonderful
if the local council were able to find a partner with access to money to help
develop the town centre. Don’t you think it would be just marvellous?

CEUB is a group set up to make public comment on the management of the University of Bolton.